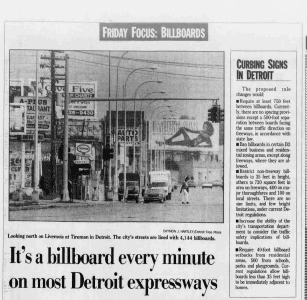 Detroit is working on a new sign ordinance. A good sign ordinance complements city planning efforts, enhances community aesthetics, and balances community interests. Unfortunately, the draft ordinance under consideration falls short on these three points. In an effort to appease the interest of the outdoor advertising industry and building owners seeking to earn easy income off of blank walls, the City has developed a sign ordinance that will most certainly sabotage many of the placemaking and environmental initiatives underway in the City and is unlikely to benefit the community in the long run. As drafted the ordinance:

While the City must update its sign ordinance to be compliant with Reed v. Town of Gilbert, adopting the current draft would ill-advised. As drafted, this ordinance is in direct conflict with the City’s Master Plan policies (see sections on Design &  Energy/Environment), Sustainability Action Agenda, Streetscape Program, and many nonprofit initiatives such as Safe Passage Great Lakes.  Detroit has been working for decades to decrease the number of signs and types of signs across the city. If passed, this ordinance would move Detroit backwards, not forwards.

Scenic Michigan is working with local stakeholders (Wayne State University, Midtown Inc, Sierra Club, and Audubon Society among others) concerned about the impacts this ordinance would have both on economic development and the environment.  If you’re aware of another organization that we should reach out to or neighborhood association, please send us a note [email protected]